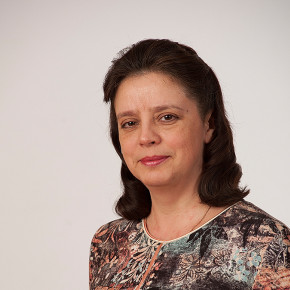 Irina Yu. Efimova graduated with honors from the Medical-Biological Faculty of the Tomsk State Medical University in 1990. After graduation, she worked as a Senior Technician in the Laboratory of Radionuclide Imaging Studies in Cardiology Research Institute. Then, she continued working at the laboratory as Junior Scientist (from 1991), Scientist (from 1995), Nuclear Medicine Physician (from 2000), and Senior Scientist (from 2010).

Since 1992, she has been an Academic Secretary of Cardiology Research Institute.

Primary research interests of Irina Yu. Efimova comprise evaluation of cerebral circulation disorders in the presence of diseased brachiocephalic arteries, ischemic heart disease, and arterial hypertension based on the methods of radionuclide indication.
For her scientific studies, Irina Yu. Efimova has received Tomsk Region Administration Award in the Field of Science and Education (1997, 2005). She was also awarded the Commemorative Medal of Merit for her service to the City of Tomsk (2004), the Letter of Appreciation from the Governor of the Tomsk Region (2006), the Certificate of Merit from the Tomsk Region Administration (2013), and the Silver Commemorative Token of “Tomsk Region Arms” (2016).